We know that many tourists are wondering, “What language do they speak in Montenegro?” Let’s try to answer it from the point of view of people who visited the country few times as ordinary tourists.

What language is spoken in Montenegro?

Historically Montenegro was a part of Yugoslavia, so it’s language is similar to Serbian. What is really interesting is that they have two types of alphabet in here: Cyrillic, that comes from Serbia, and Latin, that have Croatian roots. So, naturally, it probably would be hard for you to understand Cyrillic alphabet, that is widely used in former Soviet Union countries, but is very rare in Europe. So lets talk in detail about Montenegrin alphabet.

Variants of the Montenegrin language.

The Montenegrin language itself is very similar to Serbian. Initially, the differences between them were very insignificant and they were based mostly on politics rather than real necessity.

In 2007, a language reform was performed, that simplify the Montenegrin language as much as possible. As a result, they’ve got two written versions: Cyrillic and Latin.

This means that any document can be written both in Cyrillic (Russian letters) and in Latin letters (English letters). In official papers, they often use both options, in real life they write as they want.

This is the most interesting feature of the Montenegrin language. The other interesting fact — different letters used in different cities. Why is it so? Well, some cities, like Budva, have a majority of Russian-speaking tourists, when in cities like Kotor you will find tourists from Europe in general. Not only that, a lot of ads nearby Budva (especially ones about real estate) are written not in Montenegrin, but in Russian language. It was quite popular among Russian businessmen to buy real estate here and then spend a summer vacation in own house. Approximately after 2015, due to a crisis in Russia, it become less common.

Will they understand me in Montenegro?

Well, it’s a tricky question. They will definitely try. If you’re staying in a large city crowded with tourists, it would be easier to understand each other. But if you’re going outside of tourist areas, you may find people that don’t speak English at all. But, nevertheless, if you would be polite, they will try to understand you really hard, so you may use some gestures, numbers or locations on your phone to help them understand you. But this applies only to mountain regions and local markets, if you’re nearby the coastline, they will understand basic English.

Is it difficult to understand Montenegrin?

If we talk about price tags in stores (they are using euros in Montenegro), signs, the names of food products, fruits, or buying clothes or souvenirs, it will not be difficult to speak with people.

If you want to communicate with the locals, then this will take some effort. Especially if we’re talking about older people — in most cases they can’t understand even basic English. But nothing is impossible, you may try to speak with young people. Or you could talk to the seller — they are a little more interested to understand you. 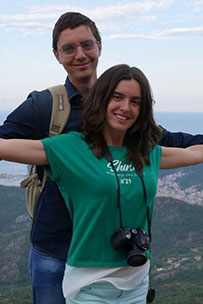 Victor and Alina,
authors of the guide